Obsessive-compulsive disorder, commonly known as OCD, is a frequently misunderstood condition. Often, we hear people stereotyping it as an enthusiasm for cleanliness and order. They may look at somebody who is particularly neat and tidy, or who keeps their books in a specific order and say that person has OCD. In reality, obsessive-compulsive disorder (OCD) is a much more layered condition that can have a range of symptoms.

A form of anxiety disorder, OCD commonly first emerges in the childhood or teen years, though it is also possible for it to first appear in adulthood. Given the vast number of changes and developments which occur during childhood and adolescence, recognizing a case of obsessive-compulsive disorder can be difficult. Very young children may be more open about their feelings and behaviors, whereas teens can find it difficult to speak out.

For a parent, teacher, or friend of teenagers, understanding the signs of OCD and when to seek professional mental health support is important. What Is Obsessive Compulsive Disorder (OCD)?

Obsessive-compulsive disorder is characterized by involuntary, intrusive thoughts known as obsessions. These could be thoughts, visual or audible sensations, or feelings that cause upset and distress.

Somebody with OCD can respond to these obsessions with compulsions. Compulsions are repeated behaviors that are believed to manage or help cope with the obsessions. Common compulsions could include washing, counting, stepping, and much more.

Not everyone who experiences unwanted thoughts will have OCD. In fact, most people will experience unwanted thoughts at some point in their life. However, people with the condition will be considerably more distressed by the obsessions, attaching more significance to them. Obsessive-compulsive disorder usually leads to a decreased quality of life and can severely impact the mental well-being of children and teens.

Severe OCD in teens is likely to affect their ability to lead a normal life. Some young people may struggle to sleep, go to school, form friendships, and develop their own independence.

If your child develops OCD, it can be a painful experience to watch them going through something so challenging. But the good news is, there is effective treatment available. They won’t always have to struggle with their symptoms.

When we talk about obsessions or obsessive behavior in young people with OCD, we are referring to the intense and overwhelming thoughts or fears they experience.

Obsessions vary widely between people and can be based on a number of things. Some young people will experience very frequent obsessive thoughts. Others may experience them more sporadically. The intensity of obsessive thoughts also varies. At times they can be so significant they take over many areas of a teen’s life.

Regardless of their frequency and intensity, these intrusive thoughts are likely to make children and teens anxious and distressed.

Some common examples of obsessions include the following.

Everybody has involuntary thoughts at some point in their life, and it’s a natural part of being human. The difference between this and OCD is that the thoughts can be all-consuming and are not easily relieved. Someone with obsessive-compulsive disorder will often enact compulsive behaviors in an attempt to soothe the anxiety related to their obsessions. Compulsions are the behaviors that follow obsessions. Usually, they are somewhat repetitive, patterned, or strict. People with OCD may believe these compulsions will help them manage their obsessions, preventing outcomes they may fear. Teens with OCD may be worried that if they don’t carry out the compulsive behavior, something bad will happen.

Like with obsessions, compulsions can take many forms. For some people, it may include cleaning, ordering, or checking. Others may be ritualistic such as praying, stepping, or blinking a certain number of times. If young people engage in certain routines, they may repeat the whole process if they make a ‘mistake’ or are interrupted. These behaviors give children with OCD a sense of control over their behavior. However, the sense of control does not usually last long.

Some common examples of compulsions include:

As you can see, some compulsive behaviors come out of fairly normal activities. Checking that lights are off, keeping things ordered, and washing hands thoroughly are all normal and healthy behaviors. However, when these behaviors become overwhelming and take up a lot of time it could indicate an issue.

Obsessions and compulsions can impact other family members too. The result of not being able to enact the compulsive behaviors can result in stress, anxiety, and anger. This can impact the whole family, friends, and classmates who are around. 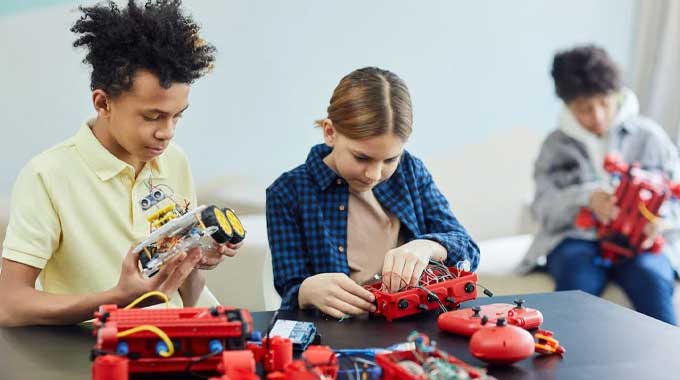 Understanding the signs and how OCD manifests in teens is important if you want to support young people through their mental health issues. Obsessive-compulsive disorder can be helped with treatment. The sooner you seek advice from a mental health professional, the better the chances for the teen to regain a normal life.

Routines are normal in children and young people, and these may even become healthy rituals. But, it’s crucial to recognize if these behaviors are negatively impacting a young person’s life and to what extent they are able to deal with changes to their routine. If it seems as though their quality of life is being affected by their need to behave in a certain way, it could indicate a case of OCD.

Typically, obsessive-compulsive disorder develops gradually. This can make it difficult for adults to identify initial OCD symptoms. Furthermore, during childhood and adolescence, there are many changes that are unrelated to anxiety disorders, some of which can impact a young person’s behavior and thoughts.

Noticing the way in which your child’s behavior affects them can be more indicative of what is going on. For example, if they like to order their books in a certain way, but they are not upset if somebody re-orders them or they get a bit mixed up, this sounds like a healthy level of organization. On the other hand, if they feel particularly distressed or anxious when their behavior is interrupted, this could indicate the presence of OCD and related disorders.

Read on for more detail on how the development of OCD may play out.

Children with obsessive-compulsive disorder may find it difficult to leave the house, and their routine before leaving can take some time.

One way OCD can manifest is by checking doors, windows, switches, ovens, heaters, and so forth to ensure they are off or switched to the right place before leaving. If they cannot complete these checks, they may be stressed, sad, anxious, or angry.

This kind of routine can impact the entire family, causing relational problems between members.

Many people who live with OCD, both adults and children, are impacted by hand washing. This usually comes as a response to a fear of illness or infection or a way to rid difficult emotions.

Children who are engaging in repeated handwashing as part of their OCD may have very dry, raw, or cut hands. They may also go to the bathroom very often.

Unfortunately, many young people go for years without a diagnosis of OCD. Obsessive-compulsive disorder can lead to some significant mood changes and lead a young person to feel lonely or isolated. This can lead them to misuse drugs or alcohol, and in some cases, lead to the development of a substance use disorder.

OCD can significantly impact a young person’s sleep. This can be to do with their pre-sleep routine, which may take a long time, or to do with the feelings and emotions that come up at night. Without the distractions of the day, nighttime is often when rumination and worries emerge.

Depending on what their pre-sleep routine is, this can add upwards of an hour to their bedtime. Lack of sleep has a number of detrimental impacts on child development, including social, cognitive, and physical.

Children and young adults who are living with OCD often become isolated and estranged from friend groups. This can be caused by the following:

What Causes OCD in Teens?

Mental health disorders rarely originate from one reason, this is no different for OCD. Obsessive-compulsive disorder is thought to develop for a number of reasons, outlined below.

OCD can be genetic. This means if OCD runs in the family, it increases the chances of a child developing it. This is thought to be to do with genes, however, it is not yet known exactly which genes are associated.

Additionally, growing up in an environment where others have the condition can lead to learned behaviors. If young children see specific patterns, they may copy them.

Stress or trauma could be a factor that leads to obsessive-compulsive disorder. Young people who have experienced particularly stressful experiences are more likely to develop a mental health disorder such as anxiety or depression.

It’s important to distinguish between PTSD and OCD as some symptoms may overlap. Individuals with PTSD typically ruminate over past experiences, whereas somebody with OCD is more likely to be concerned about the future.

The existence of other mental health disorders is thought to contribute to the likelihood of developing OCD. This includes depression, eating disorders, and substance misuse.

How Do We Treat OCD?

Obsessive-compulsive disorder does not have a specific cure. However, there are a number of effective treatments which can enable young people to go on and live a happy, healthy life.

A teen’s OCD should be approached differently than that of an adult. Teenagers are at a particularly sensitive period of development and it is important to consider this when planning for their recovery. Effective, early treatment gives the best outcomes for the future. Below we look at some components which could be included in their recovery plan.

In the treatment of OCD in teens, cognitive behavioral therapy (CBT) is often used. This therapy is concerned with thought patterns and behavioral responses. Through CBT, young people can begin to recognize their thought patterns, understand them, and eventually change them.

This treatment is often used in cases of OCD. This is where the child is gently exposed to a fear they have, for example, dirt, disorganization, or breaking a routine.

Crucially, the treatment slowly builds the child up to manage the fear as opposed to making them abruptly face their fear. The therapist will work with the young person to develop coping strategies for these scenarios.

OCD in teens can significantly impact the wider family unit. Family therapy can be an effective method of treatment as it helps all members develop useful coping strategies for stressful events. Additionally, it can improve communication between family members; this may have been damaged during the young person’s journey with the disorder.

Here at Clearfork Academy, we understand the challenges of adolescence. There are so many internal and external changes to grapple with, and sometimes it can feel completely overwhelming. The added difficulty of mental illness, such as an anxiety disorder, can be extremely challenging for young people and their families.

Knowing OCD symptoms and signs is the first step in helping them through their condition, and seeking help from a mental health professional is crucial in treating OCD effectively.

At Clearfork Academy in Fort Worth, Texas, we recognize the need for a strong family unit to get through any mental health condition. That’s why we take a family systems approach to our treatment.

If a young person in your life is living with OCD, or you are concerned about someone you know, get in touch with us today to find out your options.