There are plenty of valid reasons to be concerned about teen drinking. Teen drinking can lead to catastrophic consequences, both physically and emotionally. With fake IDs, older friends who can purchase it for them, and accessible liquor cabinets at home, it’s not hard for teens to obtain alcohol if they want to, which can all worsen the temptation to drink underage.

Out of a desire to curb temptation or curiosity, many parents allow their teens to drink alcohol at home under their supervision. In some cultures and religions, alcohol plays an integral role in sacred traditions. While we respect the right of parents to make their own decisions for their children, we at Clearfork Academy feel that this decision can produce significant consequences for their future. Through our years of experience helping teenagers overcome alcohol and substance abuse, we have seen the long-lasting effects that can result from allowing teenagers to drink alcohol within the comfort of their homes.

While a sip of mom and dad’s alcohol doesn’t guarantee a future drinking problem, it is well known that teens who start drinking before the age of 15 are much more likely to experience alcoholism in their lifetime. We say this not to scare parents but to help them weigh the risks appropriately. The cognitive effects of drinking at a young age are too intense to take these matters lightly. In our experience, it is far too easy for a sip “every now and then” to become a regular occurrence. Normalizing substance use within the home at an early age can have devastating effects on teenage development, especially because their young brains are not yet fully developed.

The Consequences of Teen Drinking on the Brain

There is no question that alcohol use can impair brain functioning and structure, especially for vulnerable teenage brains. In particular, the brain’s reward center, which identifies feelings of pleasure, quickly learns to associate the use of alcohol with perceived feelings of pleasure. With regular drinking, the brain learns to only experience pleasure through the use of alcohol and will eventually require more alcohol to achieve that feeling once the body develops a tolerance.

As the brain becomes preoccupied with seeking and using alcohol to achieve feelings of pleasure, other brain areas will inevitably suffer at the cost. As a result, teenagers that regularly use alcohol will likely experience cognitive impairments, such as learning difficulties and memory loss, which can affect academic performance. These effects can last well into adulthood.

The Correlation Between Teen Drinking and Drunk Driving

Teen driving under the influence is one of the most dangerous risks of underage alcohol consumption. Not surprisingly, teens who start drinking at a young age are more likely to drive drunk or get involved in a car wreck at some point in their life. Roughly ten percent of teens who are of driving age have driven a car after drinking alcohol.

Still, it is important to point out that many parents may be contributing to this risk by allowing teens to drink at home, especially if they aren’t aware of how alcohol can affect their teens. Just because a teen doesn’t appear to be drunk doesn’t mean that alcohol is not physically or mentally affecting them. Although an adult may not be considered drunk when they consume less than the legal limit, a teen requires much less alcohol to become mentally and physically impaired.

How to Break the Familial Cycle of Addiction

Parents who are aware of a history of alcoholism in the family should be especially wary of allowing their teens to drink at home. Alcoholism is an addiction, which is classified as a disease. Like other diseases, it is something that can be passed down through generations. While this is no guarantee that subsequent generations will use substances, it greatly increases the risk. Teens in these family structures are predisposed to potential drinking problems when alcohol is present.

As a parent, you may want to have a frank discussion with your teen about your family history of mental health disorders and substance use if you know about it. Be honest about the possible outcomes of this life-altering condition, not to shame or scare them, but to educate and make them aware. The risk of developing alcoholism increases the closer an affected relative is to an impressionable teen, especially if that relative is a parent.

You can set a positive example for your teens by being a positive role model. You can practice safe and moderate drinking habits, or even better, avoid using alcohol within the home when your teen is present. It is also important to emphasize that the legal drinking age is put in place for their protection. Above all, ensure that your teen understands the risks and consequences involved with underage drinking, and set healthy expectations with your teen moving forward.

In our work with teenagers who are addicted to alcohol, we firmly believe that it is not in a teen’s best interest to consume alcohol in the home. While this practice is certainly not a guarantee that they will develop alcoholism later in life, the risks far outweigh the rewards. Parents may believe that they are helping curb the temptation to drink, but in our experience, we see that this tends to be the beginning of a long, uphill battle against addiction. Clearfork Academy is a treatment center for teens that has a long track record of helping teens achieve and sustain sobriety. We offer a range of different treatment programs and services to help prevent and treat teen substance use, as well as relapse. If you suspect that your teen is struggling with substance use, do not hesitate to call us today at (888) 966-8604. 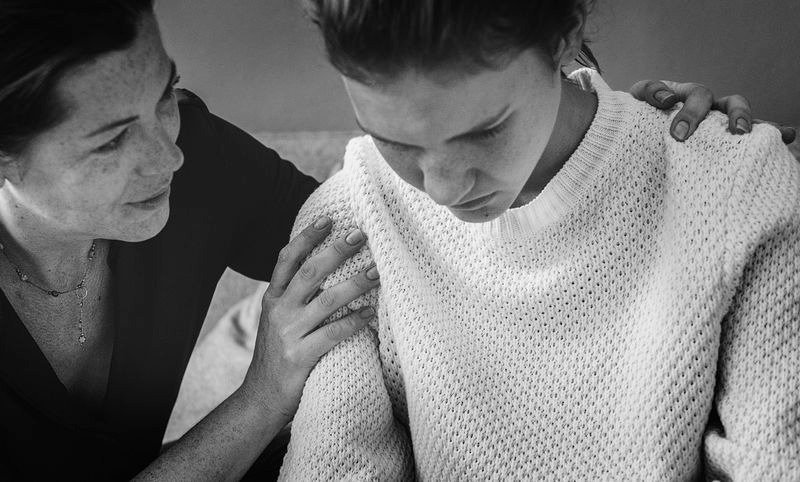 Listen to Your Teen

During the conversation, apply active listening. While it might be your first impulse to go on the attack, that will not help anyone, and it won’t give you all the information you need. Instead, listen to try and understand what your teen is saying. Look at their body language, and listen to their tone of voice.

We suggest preparing a list of specific questions regarding their recent behaviors to offer the discussion some structure and direction. Try to stay calm and avoid becoming defensive if they deny using the substances. Many teens who abuse substances will lie about it for fear of getting in trouble with their parents or guardians. Yet, continue to ask questions for greater clarity of the situation.

Do Not Wait for a Formal Addiction Diagnosis

Parents often worry that they do not have enough evidence or knowledge to know if their teen’s behaviors are problematic. However, it is advisable to seek help immediately rather than risk waiting and ignoring the problem.

When you become aware of your teen’s substance use, do not wait for their use to escalate. When you wait, this can mean missed opportunities for seeking treatment. You can take action right away by having an open discussion with your teen about your concerns.

The first step is to take action as soon as possible. While it may be tempting to handle the problem independently, it’s essential to find professional help, whether from a trained specialist in teen substance use disorder (SUD) or your family practitioner. Additional options for treatment include:

Educate Yourself About the Substances Your Child Consumes

It is essential to educate yourself about the substances your child is using. You also want to understand what happens if your child mixes substances.

There are a lot of great resources on the web for finding out about specific drugs, such as NIDA for Teens or SAMHSA’s National Helpline. These websites can explain the long-term consequences of substance abuse and provide information about how long substances stay in the system.

Finally, you must understand when someone is addicted to a drug. Addiction usually means that an individual cannot stop taking a substance even when they desperately want to stop; this may be because their brain has changed to crave substances more than anything else. Someone addicted will feel intense withdrawal symptoms if they stop taking a drug; sweating, shaking, nausea and vomiting may occur within just hours or days of quitting.

The only way to treat addiction is with detoxification followed by professional therapy through an addiction treatment center.

Stop Enabling Their Substance Use

When your child is using drugs, it’s easy to fall into the trap of enabling their behavior. You may want to protect them from harm but are sending the message that it’s OK to use substances. It can be a very confusing time for you as a parent, and there are many ways that we can unknowingly help our kids continue their habits. Since you love your child so much and enjoy the best for them, here is a list of behaviors that show them it’s okay to continue using drugs:

Find Support for Yourself and Other Family Members

Finding support for yourself and your family is crucial because you are likely to have questions about how best to handle your teen’s substance use. You may also need advice from other parents or a professional therapist on how to get through this time in your life.

Support groups for parents of teens with substance abuse problems can be beneficial. In addition, individual counseling can help you or other members of the family deal with the stresses that arise with a teen with a SUD. You are not alone in this journey. Many families struggle when discovering their children’s drug use, and it’s okay if you need help dealing with the situation.

The teenage years can be demanding as you work to understand your child, their motivations, and behaviors. As you plan how to handle your teen’s drug and alcohol use and what path you think is best to get them the help they need, it’s essential to remain objective, informed, and ready to take action once you have all the facts. If you are concerned your teen is using drugs or alcohol, we urge you to seek help from an experienced and skilled treatment provider. An excellent place to start is Clearfork Academy. Our team of experienced and fully licensed clinicians knows how to identify drug addiction and help teens become substance-free. We offer evidence-based programs for the adolescent population that has been proven effective in healing those struggling with substance abuse issues. To find out more, reach out to us today by calling (888) 966-8604.